Shaun Krull was last seen when he went out to tend cattle at dusk on the evening of Thursday, 19 September 2019. It appears he was ambushed at the feedlot by a number of people.

Early on Friday morning his family tried to contact him but both his phone and radio were off. One of his colleagues went out to look for him but could not find him or his bakkie.

This colleague then went to the feedlot and discovered the body of Shaun in a grazing field on his Sunrise Eggs farm. He had been stabbed several times and it appeared as if the thieves ran over his body with his bakkie, which they then drove off in.

Shaun was born in 1971 on the farm on which he was murdered. 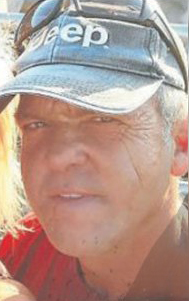 Shaun Krull (48) was stabbed to death on Mitchell’s Bon Farm in Kwelera, Amatole (EC), on Thursday, September 19. His brother Alwyn Krull, owner of Sunrise Eggs, said: “Shaun was last seen at dusk on Thursday when he went out on his regular patrol of our extensive herd of cattle.

It appears he was ambushed at the feedlot by a number of people we suspect were involved in cattle thieving. Early on Friday morning we tried to contact him but both his phone and radio were off. One of his colleagues went onto the lands but could not find him or his bakkie.

He went to the feedlot and discovered the body of Shaun lying on the ground. He had been stabbed several times and it seemed as if the thieves ran over his body with his bakkie, which they then drove off in,” said Krull.

East London police spokesperson Capt. Hazel Mqala said that Krull’s Toyota Hilux single cab 4X4 bakkie was recovered on Saturday morning, hidden in a field in the deep rural area of Ngqolowa, in Middledrift.The field is near the residence of one of the suspects who worked for the deceased before he was dismissed.

The police searched the former farm worker and recovered Krull’s farm keys, his torch and meat possibly bought by Krull. The locked vehicle has been towed to the police forensic services experts in East London and a thorough investigation will be conducted.”

Two men were arrested in Middledrift on Saturday morning, 21st September. One of the suspects is the 26-year-old cattle herder who was recently dismissed by Krull from Mitchell’s Bon Farm, and was found to be in possession of Krull’s farm keys and torch.

A second suspect is 23-years-old. A third suspect fled from the police. but was later arrested.Gonubie police station commander Lieutenant-Colonel Tolisile Mdyogolo commended the members for the arrests of  Vizicelo Wokisi (26) and Zolisa Losi (23).

The third suspect, 26 year old Vizicelo Wokisi handed himself over to the police after initially fleeing the scene.

The three men, Vusicelo Wokisi, Xhanti Ndingane and Zolani Losi, accused of the murder and robbery of an East Coast farmer, made a brief appearance in the East London magistrate’s court on Monday 23rd Sep. 2019. The trial was postponed to Wednesday when the suspects will apply for bail

2nd Court Appearance – One of the killers to plead guilty

Zhanti Ndingane, 29 told the judge that he would plead guilty when the case went to trial.  He testified that he was to drive Shaun’s bakkie away from the scene.  Vizicelo Wokisi, 26, and Zolisa Losi, 23, abandoned their bail applications.

The court heard much testimony today about how the suspects were identified by a client of Mr Krull, a policeman friend of Mr Krull and the Investigating officer.  Leads with regards to an ex-employee were followed up on, which led to the recovery of the stolen vehicle, arresting the first suspect and identifying the other 2 suspects.

A local man from the Qibira village also said that he had seen the 3 suspects together in the days before Shaun’s murder.

DENIED BAIL – One of the three men accused of killing East Coast farmer Shaun Krull was denied bail in the East London magistrate’s court on Monday. Xhanti Ndingane (29) wearing a brown hooded jacket, sighed before returning to the holding cells as magistrate Linda Magaxeni made her ruling. He hardly looked at his family, who were in the public gallery.

ABANDONED BAIL – Ndingane’s co-accused, Vizicelo Wokisi (26) and Zolisa Losi (23) have already abandoned their bail applications. But in something of a surprise move on Monday, his mother asked to take the stand. “Sgt. Kwenene took me as a witness who would testify against my own child.

But the reason I am here today is to come and support my child,” she said.The case was postponed to October 25 for further investigation

3 Accused back in court but case postponed.

The 3 accused appeared before the magistrate this week but the case was postponed to a future date.  There is still evidence that has to be processed and until such time the trial cannot continue.  The new date for the court appearance is unknown but we will provide an update in the near future.